Hit enter to search or ESC to close
BodybuildingNutritionPowerlifting

Caffeine and Your Gains.

This article discusses how caffeine can influence your progress related to muscle gain, strength gain, and fat loss!

If you are training for muscle or strength gain, you should be taking advantage of the benefits that caffeine supplementation can have on your training and competitiveness. Caffeine will likely allow you to train with slightly higher training volume, while using more of the available muscle mass you have. Both factors closely related to both muscle and strength gain.

How much should I take and when?

Around 4-6mg of caffeine per kg of bodyweight, 30-60 mins before the most important sets of your training appears to be the sweet spot when it comes to dosage. However, I’d recommend starting with around 2-3mg/kg to assess your tolerance first. The easiest & cheapest way to do this is through caffeine tablets, with more common examples being pre-workout powders, coffee, or energy drinks.

Caffeine has a small (but significant) effect on fat loss. This effect increases with increased dosage. This is related to caffeine’s effect on increasing metabolic rate causing energy to be lost from the body as heat, as well as through increasing training volume and intensity. Although, I would recommend worrying about the bigger pictures in your diet (calories, macronutrients, micronutrients, consistency) first. If you intake caffeine for the training benefits, you will inherently get the increased metabolic rate / energy burning benefits too. These effects are pretty small, for example burning the amount of energy contained in a teaspoon of sugar if you have a relatively normal intake, or a few teaspoons if you have a high caffeine intake.

Caffeine is pretty safe – it poses no significant negative health consequences when consumed at moderate doses of up to 400mg/day (17), or even up to 1000mg/day in the interpretation of some reviewers (6). Women who are breastfeeding or pregnant should not consume more than 200mg/day.

The biochemistry and metabolism of caffeine will not be of interest to most readers but if it is then I encourage you to check out this article (13).

Here are some of the results from studies examining caffeine’s effect on high intensity exercise:

However, other studies (1, 15, 3) showed no effect of caffeine supplementation on rep max sets (maximum reps with a particular weight till failure) OR total volume performed.

Caffeine supplementation appears to reduce perceptions of fatigue (5, 4, 12). Its main mechanism relative to reducing fatigue is via binding to adenosine receptors in the brain. When adenosine binds to its receptors it causes relaxation and sleepiness. Caffeine blocks this action, resulting in increased alertness and wakefulness. This is likely part of how caffeine delays fatigue during high intensity exercise (8).

Training volume is calculated by amount of sets * amount of reps * amount of weight lifted. Simply, more training volume over a long period of time, provided the weight is relatively heavy enough (~60%+ of one rep max) is a potent stimulus for muscle hypertrophy. If caffeine allows you to lift more total volume in a session, this may facilitate quicker hypertrophic gains, PROVIDED that over time you can recover from the amount of training volume (more is not always better!). This could prove to be beneficial for long term gains.

A reduced perception of fatigue may allow you to train closer to muscular failure on average AND handle more training volume. Hypothetically I’d say caffeine in this scenario would be more useful for novice and early intermediate lifters, who may limit training volume and / or load due to perceptions of fatigue, to the detriment to their progress. A reduced perceived difficulty may improve adherence to a programme when the routine has not yet been established into the lifestyle of the trainee.

Sleep deprivation is not conducive of maximal gains, BUT if you ever train sleep deprived, it is a great idea to consume caffeine beforehand as it will greatly reduce your perception of fatigue and help get a better training in.

There is some discrepancy in the literature, and minimal long term studies examining the relationship between caffeine, weight training performance, and muscle gain. The rationale as to why caffeine could be effective and with the majority of studies showing a positive effect, it makes sense to include caffeine in the nutrition plan of someone seeking muscle gain, at least for intense or more difficult parts of the training cycle.

4-6mg/kg seems to be about right for improving training volume & intensity. This dose is easily consumed through either caffeine tablets or pre-workout powder. The dose is pretty high, so getting it from coffee or energy drinks would be a bit less practical and more expensive (unless it is cheap instant coffee!).

However a dose starting around 2-3mg/kg would be good to assess before moving onto higher doses, particularly if you are not a regular caffeine consumer.

There is a large range in how long it takes for caffeine to peak in the blood following ingestion and I’d recommend experimenting on yourself with regards to caffeine ingestion timing and training. A general rule of thumb is to ingest caffeine 30-45 minutes prior to your most “important” set/sets of the day. This would likely work out to around 20 minutes before you start to warm up.

However, these studies seem to be outliers, as the review by (20) sums up the majority of the research on caffeine and maximal strength. They concluded that caffeine improves maximal strength, mainly of the knee extensors (quadriceps). This review found 23 of the 27 studies examined to show a beneficial effect of caffeine to maximum voluntary contraction, which is a commonly used and reliable measure of maximal strength (23). The benefits were on average a 4% increase to placebo (no caffeine).

Interestingly, caffeine can also reverse the lack of strength seen in the mornings compared to afternoon, shown in a study on highly resistance trained men by (16).

Caffeine likely results in the CNS recruiting more motor units (essentially more muscle) to carry out a task of lifting something. This results in a greater, more forceful contraction, which appears to us as more strength. Increased motor unit recruitment could be valuable for long term strength (and muscle) acquisition (9), as well as just during the bout of activity.

This makes sense for the quadriceps to be more affected by caffeine than the hamstrings, in studies. Without any supplementation, activation levels during maximal contractions are usually lower for the quadriceps than other muscles. Thus, topping with caffeine helps to get them closer to maximal activation, whereas the other muscles are already near 100% activation, so caffeine’s effect on the CNS has no additive benefit to maximal strength (20).

Caffeine may also act directly on the muscle tissue to improve maximal strength.

If you are training for maximal strength, it makes sense to supplement with caffeine prior to training. It makes more sense to use caffeine on days where you are training closer to failure (1 or 2 reps shy, or all out) on the lower repetition ranges (6 and below). On days when you are training further from failure ie 3 reps or more, AND the programme is less flexible via having set weights with a strict percentage base, the benefits of enhanced motor unit recruitment from caffeine ingestion are probably not as important.

If your programme is autoregulated, whether it be adjusting weights on the day and/or adjusting amount of sets on the day, caffeine ingestion will probably have more of a positive effect as it will allow you to lift more weight. Through lowering perceptions of effort and fatigue, and improving motor unit recruitment, you can likely use a touch more weight AND handle more training volume.

I would recommend lowering caffeine dosages pre-training on weeks where you are deloading. Recruiting less motor units / muscle during these periods is probably of benefit and aids recovery, which is the goal of the deload.

A dose of 5-6mg/kg prior to training seems to be the most widely studied, beneficial dose for maximal strength.

Lower doses (2-3mg/kg) still seem to have benefits to strength in some studies (3, 9) and again, I would recommend starting at around this dose to assess tolerance before moving up to higher dosages.

If you train in the morning for lifestyle reasons, it is probably worth supplementing caffeine prior to training at at least 3mg/kg to bring you up to “baseline” afternoon strength levels.

As mentioned in the last section, there is a large range in how long it takes for caffeine to peak in the blood following ingestion and it should be experimented on between individuals. With the general rule of thumb still being to ingest caffeine 30-45 minutes prior to your most “important” set/sets of the day. This would likely work out to around 20 minutes before you start to warm up.

Visible fat loss is an outcome of an overall negative energy balance (burn more calories than you consume) over a period of time. As such, caffeine’s relationship with fat loss is dependent on:

The meta-analysis by (14) found caffeine to significantly increase energy expenditure, regardless of BMI of the participants. The magnitude of this effect was on average 0.44kj burned per mg of caffeine ingested. This means a higher caffeine dose caused higher energy expenditure.

To put that in perspective, at a relatively normal caffeine consumption of 200mg/day, this equates to roughly an 88kJ energy burn (about 21 kilocalories).

At a dose on the higher end of the scale of 600mg/day, this equates to about a 63 kilocalorie / day energy expenditure. A dose of 600mg/day is roughly a couple of servings of typical preworkout AND a coffee or two, so quite a high dose!

Caffeine’s effect on appetite has not been studied very thoroughly on humans. (19) found moderate doses of caffeine (300mg) to reduce short term energy intake by 21.7% in men but no effect on women. However, (11) found caffeinated coffee not to affect appetite or energy intake in men. The dose was at 3mg/kg, a similar dose to that used by (19).

Caffeine stimulates thermogenesis causing increased energy expenditure. This process is very biochemistry heavy, if you are interested check out page 44 of (21). Here’s a brief summary of part of the process:

Caffeine has an effect on the sympathetic nervous system and release of noradrenaline. Noradrenaline release causes less efficient ATP (energy unit for cells) synthesis, with some energy being wasted as heat. This energy wasted as heat is actually a good thing when it comes to fat loss (terrible for survival though!); essentially you are using more energy whilst doing nothing extra.

If dosed high enough, caffeine has a small but significant effect on daily energy expenditure. This effect is minute at normal doses, about the equivalent energy of a teaspoon of sugar. At higher doses of 600mg/day, the effect on energy burning is more like the energy of an apple.

For the general population, I think this detail is not worth worrying about until the foundation of a successful diet and training plan have been laid in place.

For the bodybuilding prep athlete or a strength athlete getting leaner, who already has an effective and disciplined approach to their nutrition, I’d still say utilising caffeine for energy expenditure should only be a side effect of using caffeine to enhance training performance. It is worth noting that the increased training volume stimulated by caffeine intake would cause even more energy expenditure than discussed in the review in the research consensus section. However, it should be used with caution in this context as recovery and adaptation are impeded during weight loss phases, increased caffeine intake and more training volume may increase risk of burn-out / flirting with over-training.

I currently have a few spots open for new clients. Please contact me here if you are interested in the online or in-person nutrition/training services I provide.

The Self Critical Athlete. 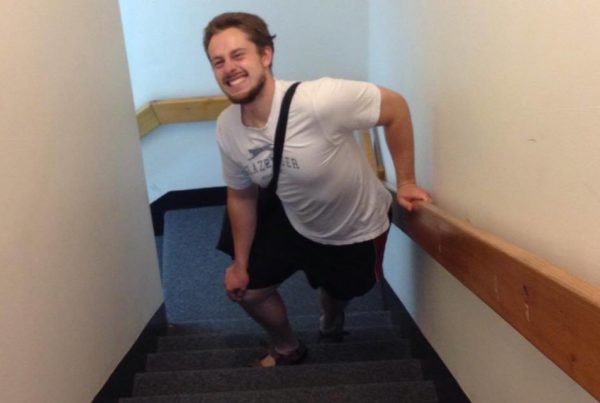 Why Soreness isn’t a Sign of a Good Workout.